It’s not required to travel far and beyond(always) to be amazed once in awhile.. often people ask me how am always excited to explore , travel .. what purpose does it serves me..To tell you the truth .. it has no definite answer .. it’s like asking someone why do they really pray .. do they believe in god or it’s  just a way of expressing the need of solitude in the midst of events of our ever-changing life … I truly though believe that  travelling and  exploring makes me happy .. it’s like praying for me.. if one wants to experience a bit of life .. they have to be OUT . Inside the cocoon of our house we try to see what we wanna see .. we try to discipline the events of our life..  though i agree ,home is the safest harbor for a human .. but till when we gonna play all safe .. for now i can’t seem to see myself to be inside, instead i want to roam around .. it’s not about  exotic places , beaches ..or to go on  an expensive vacation .. but it’s about the  small dhaba(road side small hotels) where the best local food is available .. i wanna sit on the green patch on the road side to just see the sun settling for the day .. i don’t think i have to travel far and beyond for that .. and finally to return back to the place i call home now..

Me and Td decided to take a road trip down the famous California Highway 1 . It was one of the best road trip till date.. it’s not very far from our place and we did this on a weekend .. It was a sudden plan and we packed just bare minimum all in a jiffy .. we decided we gonna cycle too , so we took our bikes with us .. and of-course how could we forget our refreshment Gears ?! The TEA .. now we were all prepared  🙂

It was a sunny day and our hearts also had their best sunshine on ..

We made our first stop at the popular Bixby Creek Bridge. The view was magnificent not just for the Bridge .. The mountains surrounding it .. the clouds cutting through the peaks .. it looked like a painting .. 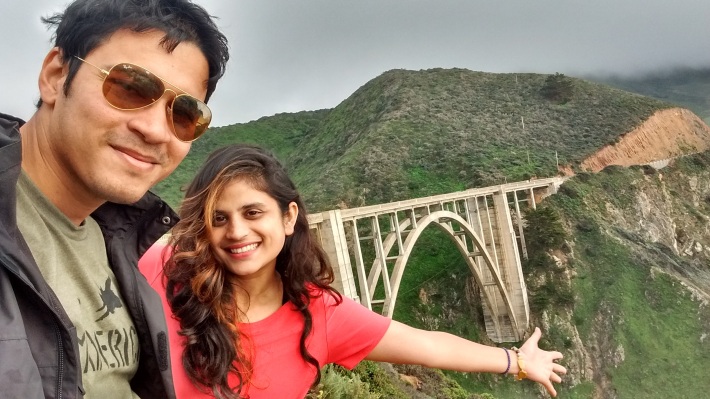 I was thinking how on earth Nature is so beautiful and we on the other hand hold beauty pageants all the time to decide the most beautiful among us!! we mere humans don’t hold a chance in front of this Magnum Creations by our mother nature..

After several moments of  solitude near the bridge we decided to start for our next destination .. As the evening started spinning its Orangey hue on the early evening sky  and the roads dwindling into one another .. we were urged to stop to take in the magnificent view spewing in-front of us .. Sunset .. we  just stopped on the roadside (on one of the pullouts) and took our tea cups and at that moment  i had my best cup of evening tea , watching the sun making its final strides and finally taking the day off  into the Pacific .. spilling out numerous colors on its way down.. 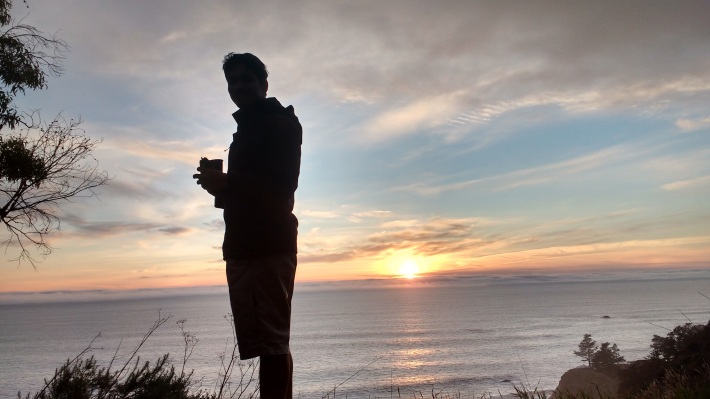 td with his tea cup

we again started on our route and it was becoming dark very fast and the roads were all curvy and had sharp turns.. though we didn’t want to drive in the night but we had no choice .. so we decided to take a short break and have our dinner in Lucia Resort on the way in the saint Lucia mountains and refresh ourselves and start for  our night’s stop at   Day’s Inn in King city .. ..

We had no plan nor did we know what we we gonna experience next .. Google map was our only savior and we had downloaded it earlier as from experience we know it’s better to have it in yr phone than trust in the phone’s network in the hilly wilderness!!!.. The roads had all sharp turns and twists and we were crossing through Los padres national forest.. but not before crossing a stream in a CAR !! yes ..to try it for the first time we were scared!!  but later we  just took a shot as we guessed by looking over the other cars on the other side of the stream that they could safely do so .. so it must be safe .. Crossing Stream in a CAR ..It was fun , yet dangerous .. i don’t know if i’m ever gonna try it again !

!There were some campgrounds on the vicinity like the Kirk camp and with our limited resources of network and phone charge we made the way into the popular Nacimiento road .. at that time we didn’t knew about this road’s specialty.. it was just another road for us to take us to King city .

but as we moved further up on the hilly terrain of the Nacimiento-Fergusson_Road , we found one sole car parked on the roadside .. No light was on and it looked as if no one was around .. but without a second thought we just moved on and after few miles we encountered another such car and after some more miles some more .. It was a little scary as we were the only one driving on this lonely road with the steep fall on one side ,The pacific roaring with the black sky on its background and the thick forest on the other side ..each time we crossed one such parked car we would be thinking this is the last one .. how can someone camp their car after this point .. it’s so lonely and dark  .. but voila , to our surprise we encountered many such camped cars .. and finally we saw some people around these car .. they were barbecuing and chilling around ..later at the comfort of our hotel room and of-course Hotel’s WiFi connection we searched about this place and found that .. it’s one of the those places which we know but still prefer to keep it a secret as it’s not a designated camping area and you need prior approval for having fire .You can find more details about this unique , thrilling style of camping in your car in here car camping . We will definitely try this in near future..

The night sky was gorgeous at this place .. as there was no light noise as in the  far away cities .. and no hotels or resorts near by .. there was absolute darkness.. and  it seemed the stars were shining their brightest .. A must  visit place for night travelers and Night sky Gazers

Okay .. so we were still on the road and were now driving down the hill (to my immense relief) and we were stopped by a huge sign of ” DO NOT ENTER, US MILITARY BASE , Fort Hunter Liggett” .. Imagine it was on a hilly Forest area and it was pitch dark  and only we two on the road .. not a single sound outside except our car’s engine..We didn’t know what to do .. as it just seemed the end of our journey and we were too exhausted to again go back up the mountainous terrain .. for few minutes we thought we should go back and ask some one in those parked cars about this Sign .. but then little far away i saw another brown board and we decided to read what’s written in there ..

To our relief it was mentioned To not go off the paved way ( as it was a US Military Base) but we could still ride through it.. so we made our way into the grounds of Fort Hunter Liggert. Later i searched about it and  found that It is mainly used as a training center now a days but some parts of it are open for General Public and serves as a recreation facility ..You can read more about it here ,Fort_Hunter_Liggett. Another interesting fact was , while crossing it , I even saw a FOX !! ..It was trying to cross the road and was taken by surprise , then it just backed its way into the forest ..

It May be thinking ” Are these humans in this time of hour and on these roads!?, invading by time of day (NIGHT)!!” haha .. at-least i would be annoyed if i would have been the fox  :p

After crossing the Fort Hunter grounds we were again on the ground level roads and we saw cars passing by .. It felt like to be coming back to civilization :p  . We drove to our night’s stop at  Days’s INN .

That night while lying on bed i was going over all these experiences i had .. the Long drive along the Pacific Coast , The tea on the roadside while watching the sunset , the Mysterious car camping site .. , Encountering the US military base at the middle of night and of-course the surprise show of the fox ..  i thought to myself .. I could have lost all these if i would have stayed inside my house on a lazy Saturday .. well then i wouldn’t have ever known how to feel about the loss as i would have never experienced these in the first place..

I would never cease to jump on any opportunity which takes me to places where i have never been to .. i have a simple mantra in my life ..

. in my case am always curious about people  and places which makes me travel and explore .. and also make friends  .. and finally that makes me Happy ..

home is where my Heart is .. :)
View all posts by namrataTanmay →

You are never too old to have a new goal or to dream a new dream.--C.S. Lewis

Journey in everything coffee.

A daily selection of the best content published on WordPress, collected for you by humans who love to read.

A soul connected to heart and life , immensely influenced by nature , surrounded by love ..... on the voyage of life discovering new islands of joy each day !!!
Travels With Nano

Sharing the world's delightful sites and bites to inspire your next travel adventure.

Recording Life Under the radar

"Of this I am certain: The moment you said, "You are..." I no longer recognized myself. ‪‎I am‬ more than the woman you see. "

Karma Is A Funny Thing

Life as a mother/wife/sister/daughter...good days and bad...we all have them.

Reports from my somewhat unusual life

Trying to live a creative life